WELL TESTING TO SOLVE THE INVERSE PROBLEM IN RESERVOIR ENGINEERING

ABSTRACT - Well testing provides a measurement of flow and pressure versus time whose variation is influenced by diffusion in a reservoir. Depending on the test duration and the reservoir diffusivity (a function of permeability, porosity and fluid properties), distances of several kilometres can be “seen”.
Considering the rate as the input, I, and pressure as the output, O, (or vice versa), the properties of the well and reservoir system, S, can be inferred: S = O ⁄ I

Unfortunately, the solution to this Inverse Problem is non-unique and there may be many different systems that produce the same output for a given input. In general, it is recommended to consider the simplest system that satisfies the measurements until other sources of information justify an increase in complexity.  Deconvolution is a powerful technique that allows the complex variations in flow and pressure measurements to be disentangled into a much simpler pressure response due to constant rate. The result is a dynamic signature of the well and reservoir response usually depicted as a pressure derivative on a log-log plot against which reservoir models can be calibrated. This noon talk will elaborate on these points and share insights from recent research at Politecnico di Torino.

BIOGRAPHY - Graduating with an Engineering Science degree from Cambridge University, Tim Whittle has worked in the oil and gas business since 1979 where he has specialised in the techniques of well testing and well test analysis.
He is currently an independent consultant and Visiting Professor at Imperial College supporting research into multi-well deconvolution and assisting in the supervision of MSc and PhD petroleum engineers. For ten years he was group technical authority and chief reservoir engineering advisor at BG Group, a highly successful E&P company that was acquired by Shell in 2016.
During that time, he ensured best practice in well testing and its analysis as a key input to reservoir modelling and simulation. He was actively involved with the recruitment and development of graduate petroleum engineers, collaborated with third parties in the development of methods and software tools and was a Distinguished Lecture for the SPE in 2010/11. He acted as external examiner at Imperial College and actively engaged with Heriot Watt and Imperial College Joint Industry Projects and research programmes. 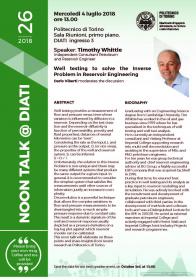