TURBULENCE IN RIVERS: STATE OF THE ART AND EXCITING OPPORTUNITIES FOR INTERDISCIPLINARY RESEARCH

BIOGRAFIA
Costantino Manes received a PhD in Environmental Hydraulics at the University of Aberdeen in 2006. He then spent two years at the Swiss Federal Institute for Snow and Avalanche Research, SLF, Davos, Switzerland, working as a post-doc on research issues related to snow-atmosphere interaction. In the period 2008-2011 he obtained another post doc position at the Politecnico di Torino, where he carried out fundamental research on wall turbulence. In the period between October 2011 and October 2015 he was a Lecturer in Hydraulics at the University of Southampton, UK where he consolidated his research and teaching portfolio within the field of Environmental Fluid Mechanics. He has been appointed as Associate Professor in Hydraulics at DIATI since November 2015. His current research interests cover a wide range of topics including: turbulence theory, river hydrodynamics, fish-turbulence interaction, transport processes in atmospheric boundary layers (e.g. methane emissions from landfills, water vapour exchange between snow and atmosphere) and biomedical fluid dynamics (e.g. encrustation of ureteral stents, laminar flows in rough micro-ducts).

ABSTRACT
Turbulence in rivers is a mysterious and fascinating phenomenon. It drives a large number of ecologically-relevant transport processes and hence plays a key role in the game of life in fluvial environments. Given its importance, river turbulence has been studied for decades by scientists and engineers with a fair success, but much remains to be done and many questions still wait for an answer. Many of these questions also pertain to other canonical shear flows (i.e. pipe flows, turbulent boundary layers and channel flows), but some of them are quite river-specific. For example, how does bed-load sediment transport influence the structure of turbulence in a river? What is the effect of gravity waves on near-bed turbulence and ultimately on friction? What is the spectrum of turbulence in rivers and how does it relate with mean flow characteristics? This talk will present my own view on these research topics and how these tie up with important applications in hydraulic engineering. The talk will also discuss the key role of river turbulence in a newly emerging research field namely, the study of fish behaviour (individual and schooling) in response to hydrodynamic cues within thecontext of fish-migration in altered rivers. 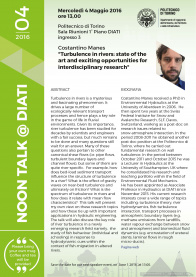