ABSTRACT - The Antarctic circumnavigation expedition (ACE) was an unprecedented 3-month scientific voyage in 2016–2017, involving 22 projects that covered biological, climatological and oceanographic aspects of the Southern Ocean environment. During ACE, waves and current were measured continuously using a marine radar device (WAMOS). In addition, wind speed was monitored by the meteorological station on board of the vessel and subsurface current was measured with an ADCP installed 9m below the keel. Data is backed up by satellite data from the TerraSarX satellite system. In this talk, we will report the incredible ACE journey through the Southern Ocean and the Antarctic marginal ice zone, sister voyages complementing initial observations and outline plans to use this unique dataset to derive new understanding of Southern Ocean processes, and advance the WaveWatch3 wave model and CICE sea ice model.

BIOGRAPHY - Prof Toffoli is a world-leading expert with a wealth of experience in ocean and coastal engineering, physical oceanography, marine forecasting, ocean climate and coupled atmospheric and ocean processes such as air-sea, wave-current, wave-ice and wave-structure interactions. This includes research projects, consultancies and teaching, during a research career at both Universities and in shipping and offshore industries. Notably, A/Prof Toffoli worked as Research Fellow at Det Norske Veritas (a Norwegian shipping industry) and at Swinburne University of Technology (Australia), before being appointed as Associate Professor in Coastal and Maritime Engineering at Plymouth University (UK). In 2016 he was appointed as Associate Professor in Ocean Engineering joining the Ocean Engineering group in the Department of Infrastructure Engineering at the University of Melbourne (Australia). For the past 10 years, Prof Toffoli has been working on the stochastic predictions of rogue waves from a theoretical, numerical and experimental basis with the primary aim of defining warnings for mariners. His pioneering experimental research in the biggest ocean wave basins in the world contributed substantially to understanding rogue waves and detecting those sea state conditions more prone to extremes. Experimental findings and the development and validation of a computationally efficient model for predicting the occurrence of rogue waves has underpinned the implementation of the first operational warning system for rogue waves at the European Centre for Medium-Range Weather Forecasts. 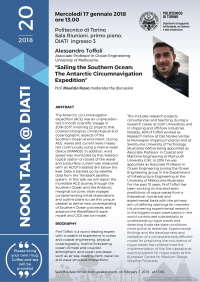