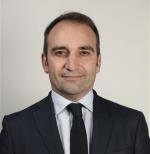 Stefano LO RUSSO Ph.D., is the Mayor of Torino and of the Metropolitan City of Torino since 27 October 2021.

He was the Advisor to the Rector for the relations with the Russian Federation from July 2017 to October 2021.

His scientific activity focuses mainly on the low-enthalpy geothermal systems and the hydrogeological problems related to the protection, management and planning of groundwater resources. Other scientific interests regard the engineering geologic mapping through innovative techniques of digital photo-interpretation and remote sensing, the study of the deep-seated gravitational slope deformations (DSGSDs), the rock-fall risk analysis and mitigation, the energy security and transition, the raw materials and the mining sustainability.