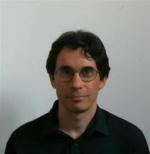 2001: Master's Degree in Environmental Engineering at Politecnico di Torino in July 2001 with a thesis on the "Analysis of coherent structures in wall turbulence: classical methods and phase space".

2005: Ph.D. in Hydraulic Engineering at the Polytechnic of Turin with thesis on "On the short- and long-term behaviour on meandering rivers", supervised by Prof. Luca Ridolfi and Amilcare Porporato.

In September 2008 he received the "Torricelli Award" of the GII ("Gruppo Italiano di Idraulica") for the best young italian researcher in hydraulics in the years 2006/2008.

He is author of more than 80 pubblications on ISI peer-reviewed international journals and attended nearly twenty national and international conferences. His scientific activity mainly concerns fluid mechanics with a particular attention to the morphological instability of geophysical flows, river mechanics, stochastic modeling in biomorphodynamics and hemodynamics.